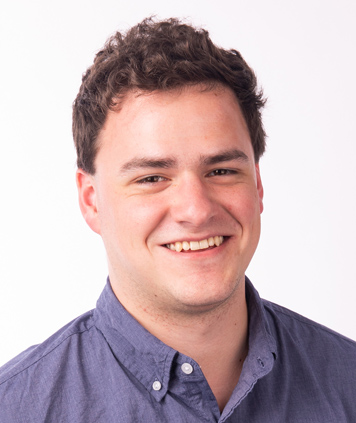 Kevin was born and raised in Columbus, Ohio. As a child, whenever an adult would ask him what he wanted to be when he grew up, he would answer, a chef, and then promote his signature dish, chocolate soup. In a way, this was the beginning of his creative personality.

His interest in the creative process bloomed in high school when he started writing and performing music with some of his closest friends. Through songwriting, Kevin developed an understanding for taking larger creative concepts and narrowing them down into a refined piece of work. It also helped him learn to brainstorm and coordinate alongside a team.

Setting aside the aspirations of a rock star lifestyle, Kevin attended The Ohio State University’s Department of Design. Shortly after graduating with degrees in visual communication design and English, Kevin joined the team at Creative Spot, where he creates smart, strategic design work for a wide variety of clients.

His Creative Spot: Early mornings with a cup of coffee and a notebook.

Inspired By: Peter Megert, a friend and design mentor.

Little Known Fact: In 4th grade, he won 3rd place for inventing the “Go-Cone,” a sleeve that fits in your car cup holder and allows the driver to store their ice cream cone so that they can safely focus on the road.

If He Wasn’t In Advertising: He’d write short stories and poetry.